Friday Favorite: One for the Money 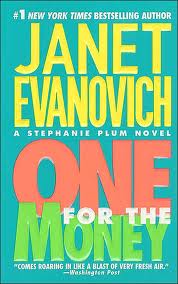 *************Spoiler alert**************
Popcorn in hand, my friend Ange turned to me and grinned. “Audience demographic is no surprise.”
As we climbed the light-lined stairs, I saw what she meant. Only a couple of men held seats in the packed theater. I’m pretty sure one was there under duress.
Fans who’ve read Janet Evanovich’s Stephanie Plum series over the last couple of decades are simply happy as Plum with a Tasty Cake that a movie was finally made.  I know I am.
Since the book has such a strong fan base, the task of creating a proper script and casting correctly must've required a team of people working harder than Lula’s spandex.
I’m pleased with some choices, but less pleased with others. Oh well, you can’t have your Morelli and Ranger, too.

The script was a great translation from novel to screen.  It’s funny. At times, the delivery was a one-liner after another and seemed a little forced, but it had more to do with acting than the script.  The style of the novel is comic-quick, too, but it isn’t as forced on the page.  On the bright side, the movie is laugh-out-loud funny, which is reminiscent of the book. For time’s sake, a few parts were left out, but the heart of the series was definitely intact.
Let’s discuss casting: 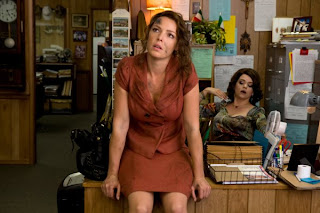 Stephanie Plum: Katherine Heigl is a brave, brave woman to take on the much beloved role of the lingerie salesman turned bounty hunter.  (Daniel Radcliffe took on Harry Potter when he was too young to know what he was getting into and the series wasn’t complete.)  People have been imagining Plum for seventeen years.  When Heigl was cast, I might have thrown up a little in my mouth. With that in mind, she surprised me. I didn't love her, but I accepted her.  Maybe because I love the books so much I want it to work.  However, I actually lived in New Jersey for a year and I never heard an accent like the one she used--even on Jersey transit.  No one can be the Stephanie in my imagination, and for her to perform in a way that makes me not despise her and actually hope there’s another movie, I applaud her. 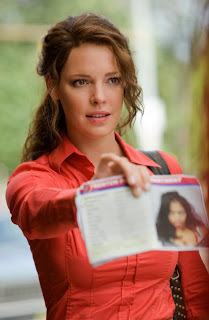 But that doesn't change the fact her eyes are the wrong color. 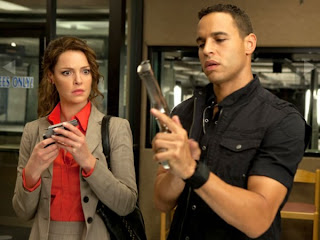 Ranger: (insert sigh) Daniel Sunjata has the look of Ranger, but his performance proved that men don’t get what we see in Ranger.  He’s a fantasy.  He’s an action figure.  He’s not real.  He’s supposed to be like the dark tinted windows on the cars he drives.  He sees us…I mean, Stephanie...clearly, but we can’t see anything but his sleek, sexy exterior. He’s a flat character who only begins to develop after many, many books. Sunjata made him too jovial, too soft. I never imagined Ranger flirting back with the women who fall all over him.  He’s above that. He knows he’s hot. 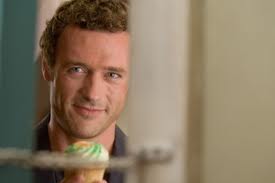 Morelli: When I first saw the casting, I thought, “No way!” Then I watched Jason O'Mara in action. He is a bit old to play Morelli, but I liked him.  He has the spitfire unpredictability and the spark in his eye necessary for Morelli. The chemistry between him and Plum worked...after a few rough scenes.

Many, many of us would have liked the film made when Sandra Bullock and The Rock were age appropriate enough to play Stephanie and Ranger. O'Mara would have rounded out that cast nicely.
Connie: Fine. My friend thought it should have been Debbie Mazar from Entourage. I was just stuck on my misinformed vision of Connie in my brain as a blonde.
Vinnie: Patrick Fischler is right on.  Perfect weasel. 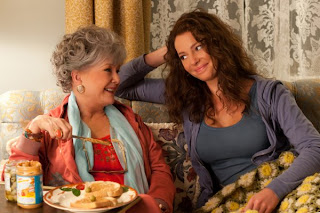 Grandma Mazur: Debbie Reynolds is iconic. However, I imagined Grandma Mazur as a feisty, spry, little ol’ geezer. I'd have cast her as Cloris Leachman, the award winning actress who plays the grandmother in Raising Hope. 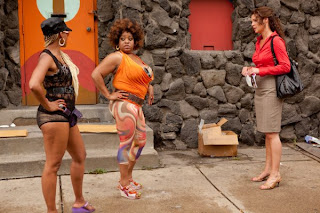 Lula: Best casting of movie.  Shari Shepherd rocked this part like it was made for her. I hope a sequel is made just so I can watch Lula in action again. In fact, just make a movie about her.  If you're a fan of the book, the movie is worth watching so you can see Lula in person.
All in all, I would see it again. I'd like to get to see the characters in action and meet some that were missing--Joyce Barnhardt, anyone?

The casting was definitely this movie's weakness. Let's hope Two for the Dough gets made.
Posted by Brandi at 4:03 PM