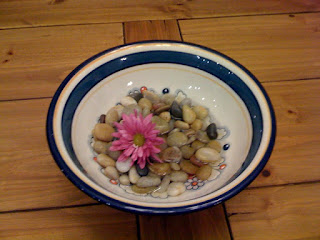 Many of you may know the story of Stone Soup. If not, go here for a variety of versions.

My writing group gathered last weekend at my home for a potluck and critique session before submitting to an annual contest. I made soups and they brought the rest of the meal. We've gathered like this for years.

In the spirit of the Stone Soup story, I thought we might explain what we all bring to the critique group, but I changed my mind. Instead, I asked everyone to tell what they take from the group. It was a nice way to start the meal and affirm what we were trying to do that day.

When they went home, I sent goody bags. Among other things, each contained a stone to remind them that they weren't alone.
Posted by Brandi at 9:41 AM No comments:

Journal: Go around your home and gather 3-5 objects. Create a character and scene that uses all three objects.
Posted by Brandi at 11:40 AM No comments:

Journal: Write about ordering something online.
Posted by Brandi at 5:18 PM No comments:

"There is a great deal of poetry and fine sentiment in a chest of tea."
--Ralph Waldo Emerson 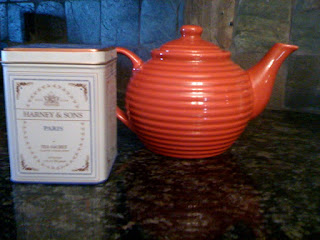 I don't order a lot of things online, but I ordered one of my new favorite teas. When it arrived today, I was giddy.

To make the day even better, a friend of mine sent a gift with the same contents. Yummy. Thanks, Lisa! Do I have amazing friends or what?

Go here to get your very own delicious treat.
Posted by Brandi at 5:06 PM No comments:

Did you hear about the economy?

What started as a "scratch" on the screen of my iPhone has spread to a gaping hole. Yesterday I learned that if I'd taken it in when it first happened, a replacement would have been free because it was still under warranty. Not now. Now $199 will replace the screen. But if I'd like a new phone, I'll have to pay $500 because our contract is still effective and so I have to pay more. At least that's my understanding.

But I'm not understanding a lot these days.

For example, I thought the nation was in a financial crisis. No one had told the customers of the Apple store yesterday. Seriously. I think the fire code for occupation was violated. Every person there was spending money.

I made an appointment for 4:15 at the Apple store yesterday. So, I showed up at 4:10. The store was crazy-busy, and none of the people in blue shirts even looked my way as I made it to the back of the store where the signs advertised "geniuses" were at work. I waited. I noticed my name on a screen that moved me from #6 to #5. When the time changed to 4:15, I approached the guy. He asked if I'd checked in at the front. Well, no. No one had told me I needed to check in. I'd shown up for my appointment at the given time...early, actually. Too bad. Five other people were placed ahead of me because I hadn't checked it. Although my appointment was for 4:15, it didn't occur until 25 minutes after my arrival. Did I mention that no one told me checking in was necessary?

I might have taken the transaction as a teachable moment if I hadn't witnessed the guy-behind-the-counter's next customer interaction. A Kardashian wannabe strutted up in tight workout clothes and spike-heeled boots--I kid you not. Her long black hair resembled dreadlocks, and I questioned its authenticity as real hair. She told the guy she had a 5:30 but just didn't want to stick around. So, he personally waited on her once he closed his mouth and made the mumbling noises from his mouth form words. He literally tripped over his own feet as his rushed around the counter to stand beside her.

Um... why didn't I get that kind of service? Was it the stroller? My choice of sneakers instead of boots? The fact that I didn't have the word "Juicy" across my backside? (By the way, weren't those pants were out of trend years ago?) Had he seen me, laughing, on the carousel earlier scrambling to hold a screaming toddler who decidedly did not enjoy the ride? Maybe he'd witnessed me slathering my kid with disinfectant once we left the mall play area that looked more like ant hill than kid zone. Was it the fact that I played with my Chick-Fil-A to tempt my toddler to eat in the food court? Had he seen me change a wet diaper on a bench because the diaper changing station in the bathroom was full.

Who knows? She was in and out before my name moved to #1 on the screen. I remember when I used to get that kind of service.

Yep. The world is changing. The economy is probably the least of it.
Posted by Brandi at 10:52 AM No comments: 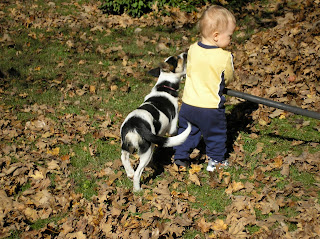 Journal: Write about a favorite pet.
Posted by Brandi at 9:06 PM No comments:

Have you ever felt like you had a little black cloud following you?

Thankfully, nothing that happened this week has been horrible--just inconvenient. The annoying factor is probably what makes it as comfortable as Chinese water torture.

I know I'm (most likely) not getting pay-backs for something awful I did in a former life.

I know karma (probably) isn't giving me what I deserve.

But what if I were cursed? What other inconvenient things might befall me?

Journal: Write about a curse of inconvenience.
Posted by Brandi at 8:57 PM No comments:

I've never been much for resolutions, but I do set goals. My husband and I have done this for several years now. At times, entire years have been given theme names.

We didn't name 2009. We thought we had everything we wanted. As the year approached we were in the midst of a move and coming off the high of 2008. We had a sweet baby boy, my first novel had just been published, and we were returning to Oklahoma to join a family business--all accomplishments we'd striven toward for years. So, we didn't bother with making goals and giving the year a theme.

Boy, was that a mistake. The first day of 2009 began with a plane ride after two hours of sleep--not because we were partying, but because we had a sick baby. We got off the plane and went directly to the pediatrician. We went to Boston Market and ate chicken. Later, after Garrett had opened a jar of peanut butter for a snack, we learned first hand about the peanut butter botulism cases that were all the news in late '08 early '09. Garrett couldn't eat peanut butter for months afterward.

The year wasn't all that bad, but it was stressful. We filled the year with change, but we didn't make any plans about how to deal with those changes. We had a lot of success, but the stress didn't let us enjoy it.

Maybe it was because we didn't make goals or assign a theme to the year.

Whatever it was, we're not going to have that stress again. This year we ate black eyed peas and greens--for luck and money--and we named our year. 2010 isn't going to happen to us. We're going to make it happen.

You have a fresh start. What are you going to do about it?