Journal: having it all

"Having it all doesn't necessarily mean having it all at once."
--Stephanie Luetkehans
For the first time in my life--aside from my first year of college--I do not have access to a washer and dryer in my home. For that matter, I no longer have a garbage disposal either. And this was by choice! My husband and I decided to move to the northeast before we knew we were going to have a family. We signed a lease on this little apartment before we knew we were pregnant. We thought we were being adventurous. We dreamed of taking long weekend trips to France, Italy, Spain, and Greece. We planned on trekking up and down the coast. I planned to see a Broadway show at least once a month and check out all the top rated tearooms in NYC. Who needs more room when you plan to be "out" most of the time? Four days before we moved we learned we were going to have a baby. Now I think "adventurous" is not the right word to describe us. Impulsive? Naive, maybe?

We moved from a home that had a backyard and a deck where we grilled. We placed pumpkins on the front porch in October and potted flowers there in the summer. Inside was enough room to entertain. Guests slept over in a real bed with a private room and their own bathroom. Stockings hung from the mantle at Christmas. One room was set aside as a library/music room where I shut the French doors and played the piano or curled up with a book. In one corner of the house was a bedroom that never really had a purpose except to store random junk, but it had a pretty window and always seemed to be set aside to be the perfect place for a nursery. We hoped to create a shelf along the top perimeter of the room and place a model train on it. When we bought the home, the only picture in the entire house was a framed ultrasound on the mantle. It seemed like a good place to start a family.

Who knew it wouldn't happen that way?

Our apartment is...an apartment. The laundry is in the basement--when it works. (The washer and dryer both broke one week before Max arrived and wasn't replaced until he was almost three weeks old. Do you know how much laundry a baby creates? Because of his overzealous spitting up and bathroom habits, he goes through more changes of clothes than a gal preparing for a first date.) Every wall in this place is white, rather than a cheery color. Limited space has tapped out my brain for storage ideas and there is more clutter than I prefer. Guests sleep on our fold-out couch that I hear gets less comfy each night. Perhaps because of this, we have fewer visitors than I'd hoped. I miss the dinners with friends and my regular writing and reading groups. I also miss calling up a pal and meeting for tea or a movie. However, we're close to The Big Apple, and our love for the city was a motivation for moving. Wonderful dining experiences and Broadway shows are just a train ride away. We're also a short drive from many exciting places to visit. From our windows we can watch the changing seasons--yes, there really are entire seasons here! The bursts of color in the spring and fall give way to lush greens and peaceful whites respectively. And we haven't had to mow the lawn once.

Is this the ideal home where I wanted to start my family? Absolutely not. Is this an experience that is totally mine? Absolutely. Before the year even arrived, I pledged that 2008 would be two-thousand-great. With my new baby and new book, it looks like that's happened.

Some say it's the little things that matter. But keeping the big picture in mind helps me get through the day.

Journal: Write a response to the quote at the top of the blog.
Posted by Brandi at 7:46 AM No comments:

My friend Alison has a thing for sharks. Her mother watched Jaws and went into labor.

I am rather fond of snakes. I mean, I don't want them hiding in my pillowcase or anything, but I don't freak out the way many people do. Before I was born, my family was fishing and either my brother or dad reeled in a snake. They claim that's when my mom went into labor with me.

I avoid scary movies, books, etc. They give me horrible nightmares. For some reason, though, I am consumed with my affection for the television show Dexter. For those of you who aren't familiar with it, the protagonist is a serial killer--who only murders bad guys. (Perhaps this is why I can watch the show: I feel fairly safe from the killer.) We Netflix them and had a marathon going before Max was born.

What was I thinking?

How will this affect him?

Maybe he'll be interested in forensics. Okay, I can handle that possibility. Of course, I was actually trying to make breakfast when I went into labor. Maybe he'll be fascinated with food. Or maybe he'll combine the two and be a butcher.

Why couldn't I have been obsessed with something completely wholesome at this time?!
Posted by Brandi at 7:10 AM No comments:

With the financial market taking a nosedive this week, it's time to fantasize a bit about money. My husband and I like to do this. We have a plan if we win the big jackpot lottery. The fact that we rarely ever purchase a ticket is completely beside the point.

Here are some of the things we'd do:
1. Contact a lawyer.
2. Set up a college fund for Max and all of our little cousins.
3. Purchase homes on Lake Tenkiller and Central Park.
4. Travel with family.

We also have different things we'd like to do with the money. For example, he'd like a really, really fast boat as well as a really, really fast car. I've always had a dream of setting up an organization that makes the world smaller for kids who want to pursue artistic interests. I'd love to be able to send kids, who might not otherwise have the opportunity, to the Louvre, Broadway, etc.

So, what would you do?

Journal: Imagine you just won/inherited a bundle of money. You decide the amount. What would you do with it?
Posted by Brandi at 1:11 AM No comments:

I've not blogged much in the last couple of weeks because my little guy arrived September 2. Heeeeeere's Max: 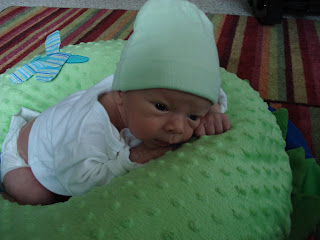 Posted by Brandi at 7:42 AM No comments:

Email ThisBlogThis!Share to TwitterShare to FacebookShare to Pinterest
Labels: baby

Sunday celebrated Grandparent's Day. My parents are both visiting and getting to know their first grandchild. I grew up knowing my mother's father and my father's mother. They've both been the subject of my writings.

Grandpa was ancient. Even my mother claims she can't remember when he didn't have white hair. He was ornery, too. Being with him was like crawling inside a time machine. He made me view life in a simple way. Whether it was savoring a corn dog or simply communing with the earth from his garden, he found joy. I think of him often and try to remember that happiness can be found as easily on a porch swing with a glass of sweet tea as it can by juggling a jillion different social engagements. He also taught me to pay attention to dialect. It took a long time to explain my trip to Italy because his version only had two syllables: Itlee.

Grandma is spunky. Contrary to my grandfather, her hair has never turned white. Actually, I don't think she's allowed her hair stylist to even allow a grey hair to escape. Grandma is a yellow dog Democrat and a committed Baptist. As a child, I was convinced she was related to Santa Clause because she mostly wore red and always showed up at Christmas with big bags filled with gifts. Instead of a ho,ho,ho, though, her constant laughter is a "Wheeee!" She's always been a trailblazer, modeling what a modern woman can do--run her own business, travel to her heart's content, be active in politics, participate in the community, love her family and much more.

Journal: Write about a grandparent. It doesn't even have to be your own. Perhaps it can be you as a grandparent. Remember, journals don't have to be true stories. You can write fiction!
Posted by Brandi at 1:30 PM No comments:

Call me a nerd. I've always liked learning new things. Most people do.

Classes have been a big part of my life. I still remember my very first piano lesson. I was in the first grade. I also remember the first time I met my dance instructor. I was four. Later, I learned to play the flute, the drums, and yes, even the pipe organ. Among others, I took classes in writing, acting, cheerleading, skiing, snorkeling. As an adult, I took singing lessons, which unfortunately, has not increased requests for my a capella. Since I'd only learned tap and ballet as a kid, I took jazz. And I'm not finished with lessons yet. There are a lot of things I still want to learn.

My husband wants to learn to scuba dive. He also wants to fly a plane by himself and stay overnight in Antarctica on an expedition.

I want to learn to create pottery and hang glide. I'd also love to be bilingual so that I can travel and effectively communicate with the natives. Somewhere in there, I should probably learn to cook and garden, too, but those things seem so much better in the mind than in practice. If I really want to be practical, I should probably learn how to text message more effectively.

What do you want to learn how to do?

Journal: Write about a lesson/class. Use your imagination. It doesn't even have to be of this world.
Posted by Brandi at 12:18 PM No comments: 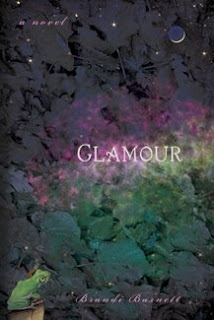 If you want to order Glamour for your library, school, bookstore, reading group, etc., you can do so now.

The book's distributor is Atlas Books. The number is 1 800 BOOKLOG.

Go ahead. Order yours before the rush!
Posted by Brandi at 7:21 AM No comments: