A Season of Thankfulness and Magical Moments 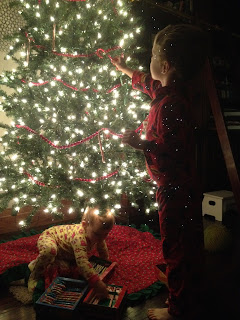 Candy canes, Christmas trees, and pajamas.  Someone pour some hot cocoa. The season is here!
Posted by Brandi at 7:40 AM 4 comments:

Tired of rich, savory holiday foods?  Add a little spice to your life and check out this chicken chili recipe!

The ingredients can be kept on hand at all times, so it's easy to whip up for gatherings.  Each year, we have a chili cook off family reunion and...ahem...I bring home an empty container. It's also a snap to take to a potluck soup and salad dinner. When hosting a group at my home I like to bring this out because it's all done beforehand and I can enjoy my guests. We've even served it on Christmas Eve to have something super easy for a bunch of people that tastes completely different from the big Christmas meal.


1.  Nuke the frozen chicken in the microwave about a minute so that you can break it into chunks.
2. Rinse and put the beans in first.
3. Add remaining ingredients.
4. Cook on low six or more hours so the flavors mix.

Everything is already cooked. You're just warming it up.

Complete Magical Meal Suggestion
I'm not above setting out the premade Wholly Guacamole and a container of sour creme to add dollops of flavor. However, if you have a little prep time, create a variety of add-ons for your guests with lime slices, shredded cheese, sour creme, and avocado slices. Add cornbread or tortilla chips.  Lemonade, margaritas, and other fruity drinks are good. Add a brownie since it's the little black dress of desserts. If you simply have water or tea, lemon bars, lemon cookies, or key lime pie finish off the meal nicely.
Enjoy!

Giving credit: I revised this chili from a delicious beef taco recipe my friend Ange gave me.

Posted by Brandi at 8:14 AM No comments:

If you are a college football fan, you may have heard of a little game we Okies call Bedlam.

Garrett and I rarely get a date, so the fact that we had an entire day together was an exciting prospect. Spending it on the campus where we met almost nineteen years ago was rather romantic.  The stadium was packed, the game was tremendous, and the University of Oklahoma won in overtime. Bonus fun! 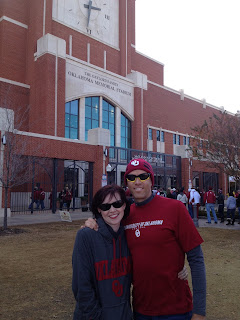 Don't let me mislead you. I am not what you'd call a football fan. People stopped inviting us to Superbowl parties years ago. This weekend I had a revelation. I realized when the love was lost.

In high school I was a cheerleader. The news stations came to our games and recorded our pep assemblies.  Red and black was everywhere because school spirit was contagious.  It was easy to be a fan then. Our teams won. All the time.  My little high school had impressive athletes. Games were a blast. I grew up thinking that sports were always like Switzer's Sooners and my hometown Bulldogs. If my school didn't win the championship each year in basketball, football, track or whatever, we held our own in the finals.

As a little girl, I thought that being a Dallas Cowboy Cheerleader was a reasonable and attainable career choice.

After attending OU, of course.  I'd heard you could learn things besides football there.

Then I went to OU...during the early nineties.  Football fans, you may recall this as the dark ages.  Coach Schnellenberger. Coach Blake. Just thinking about it makes me frown.

After one of the first home games, I remember refusing to leave the student section when everyone else had gone home.  Hot sun reflected off the empty bleachers surrounding me. I was going to be a real fan and stand by my team. Sweat poured down my face and back, but no one was around to see it.  I stuck it out until the fourth quarter, then I left, too. It's not like anyone was there to see me leave.  It was like our team had never shown up in the first place. The score was demoralizing.

It was that moment when I defected.

College can be confusing for many reasons. It's a time people reinvent themselves, lose themselves, renew themselves, etc.  But if this small town Oklahoma girl didn't even have a football team that was good, what was I to hold onto? How could I have school spirit?

After that, the madness that hit campus every game day surprised me.  What was the big deal? Didn't these people realize it was just football? College campuses were supposed to house smart people. Didn't they realize in a few hours they were going to be upset at their "victory" parties because our team was awful? What was with all the pomp and circumstance? How long could a team--no, an entire school--live on their laurels?

For some reason, yesterday gave me perspective and made me get it.

My son has attended several games with his dad and papa.

He wanted to go yesterday, too, but nobly told me I would have a good time in his place. He filled me in on details an experienced OU fan could impart to his mother.

Then he told me what he did enjoy. "I like it when the whores run on the field."

I'm pretty sure he meant the horses and the Sooner Schooner. 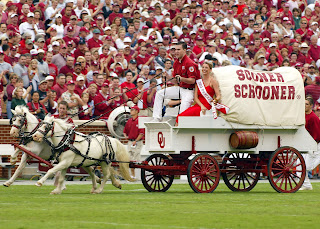 He also told me "tailgating is the best part." 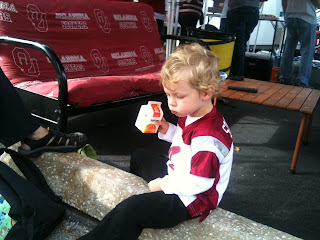 Tailgating. When friends--old and new--gather together over food and drinks and share a common bond. Everyone is drenched in crimson and creme. The air is electric with excitement. Generations of people fill the campus.

As The Pride's baton twirler artfully tossed flaming sticks into the air, I thought about my Max and his wise words.
Maybe game day isn't about football after all. Maybe it's about being a part of a community. Sharing fun. Reliving memories and creating new ones.

This must be what the Grinch felt like when his heart grew three sizes in one day. With the help of his dog Max, the Grinch took their Christmas presents, but the Whos celebrated anyway.

Even in the dark ages of football, OU fans gathered together for a common purpose.

Of course, it didn't hurt that we won the game.  Boomer Sooner!
Posted by Brandi at 7:00 AM 2 comments: 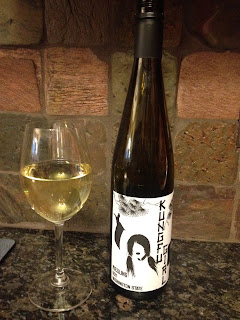 I think it's my favorite riesling of all time.


This meal is one of my absolute favorites.  When you serve this home cooked, feel good meal, people will think you know your way around a kitchen. In reality, all you'll need to locate are the crockpot and can opener.

But that'll be our little secret. Shhh!

Place meat in bottom of crockpot. Pour in remaining ingredients. Cook on low for 6-8 hours. If you cook it longer, the meat will fall to pieces--which can be really yummy on a baked potato.

Complete Magical Meal Suggestion
This meal is delicious with country green beans and mashed potatoes. Since made-from-scratch potatoes require more effort than I usually have time for, we bake sweet potatoes in the microwave.  Add green beans, corn on the cob, and a roll, and you have a meal that looks and tastes like you spent the entire day in the kitchen.

Newlyweds, this one will impress your in-laws.

Giving credit where credit is due: My mother "held this recipe close to her heart for years." Her words.  She doesn't know where she found it, but you will be grateful she did when you try it yourself.
Posted by Brandi at 7:59 AM 17 comments:

Me: You know what I love about these blocks? They have pictures. What letter is this, Maximus? 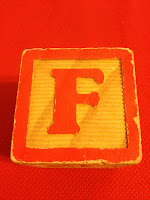 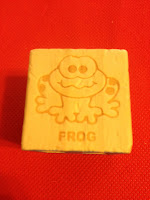 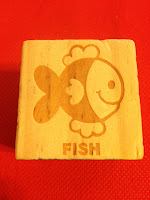 Max: F-ish. Fish!
Me: (beams in delight thinking my kid is really catching on to this whole phonics thing)
Max: F-**k. F**k! (he nods and raises his eyebrows knowingly) That word, too.
Me: (sighs) Yes. That word, too.

In case you wondered, I have not seen the block with that picture on it. 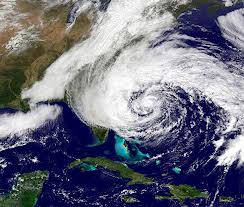 In the wake of Hurricane Sandy, Kate Messner organized the KidLit community and created an online auction to benefit the Red Cross Disaster Relief Fund.

Whether you are a children's literature fan, an aspiring author, or a published author, there's something available at this auction that might interest you.

Alexandra: My family believes in the right to vote so much that they dragged us to the polls last Friday right after they opened. 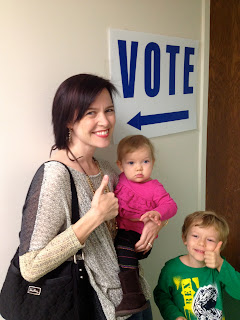 Max: It's important to make an informed decision.

Alexandra: Agreed, Big Brother. You all watched the debates without me--

Max: It was past your bedtime.

Alexandra: --which is why I borrowed Mom's phone and read the transcripts.

Max:  Well, at least I'm glad we're all on the same page.

Alexandra: I don't know about that...

Max: Wait...what? Sister, you voted for who? 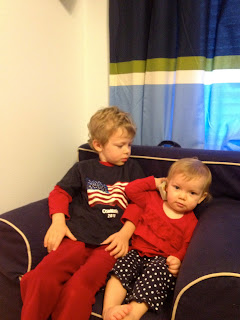 No matter your politics, exercise your rights.
Vote.
Posted by Brandi at 4:12 PM No comments:

The weather is crisp. Bring on the comfort foods!

We need 'em. When the front porch light turned off after the last trick-or-treater, the official holiday mania began.  Plus, you know, there's that little election tonight. So, over the next few weeks, I will share some of my easiest and most favorite crockpot meals.

It's my little gift to you.

I adjusted the recipe found here and added some ingredients to create this comforting potato soup. It is yummy magical goodness in a crockpot.

Crockpot Potato Soup Magic
1 30 oz bag of hashbrowns
1 32 oz box of chicken broth (or three 14 oz.cans)
1 can cream of chicken soup
1/2 of an onion, chopped
chop up some cooked ham
chop up some carrots
1/3 tsp. pepper ( I added way more than it called for because I had so much fun with my pepper grinder. I just did it until it looked kind of polka-dotted cool which made it pretty spicy.)

Cover and cook on low for 5 hours. or 8 hours. Whenever you get home is fine.

Garnish with whatever tasty delights you prefer.

Complete Magical Meal Suggestion
Even though the carrots and ham add a little something to chew on, crackers add a nice crunch. You can always throw in a salad or a grilled cheese sandwich. Fresh fruit on the side adds sweetness and color.


If you missed the first Tasty Tuesday, check out the recipe for Pinterest Chicken.
Click here for Tiffany's Chicken.

Posted by Brandi at 7:28 AM No comments:

I made costumes for Halloween 2012.

Max's robot was fun to make. No sewing. No glue. Just Christmas lights and ducktape and recycled materials. My mom spray painted the box.

My kind of costume.

Glitter covered every surface and made me realize why my mom was always so cranky around Halloween when I was a kid. All I did was tie glittered tulle to a ribbon, but I was so, so finished before the project was.

Our little robots were so cute and had so much fun that it was worth the whole glittery mess.

Posted by Brandi at 8:12 PM No comments: