Before I had one, I was never around any.

I didn't get board books. They were bored books to me.

Not anymore. Now, I see what amazing worlds unfold for my son by simply reading a board book.

And I understand why Good Night Moon is such an enduring classic. 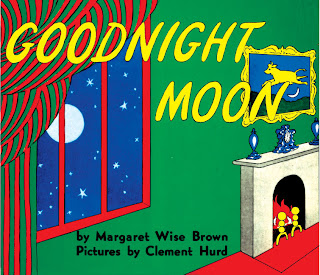 Not only are the words amazing, but there's so much to learn. The rhythm soothes us at the end of a day. The objects are vocabulary basics. (One of Max's first words was "tick tock," and he loved pointing at the clocks on all the pages.) The pictures seem to be the same scene on almost every page, but not always. Even when really young, he thought it was funny to say goodnight to "nobody" and to "air."

But do you know what? The book is not static. In the last two weeks, I've noticed two things I'd never seen before. 1. the mouse moves all over the place. 2. the boy bunny has a copy of the book on his nightstand.

See, amazing worlds unfold for me when I read as well.

Just another example of getting older and realizing how little I know.
Posted by Brandi at 8:43 PM No comments:

Email ThisBlogThis!Share to TwitterShare to FacebookShare to Pinterest
Labels: book 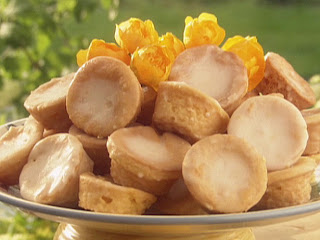 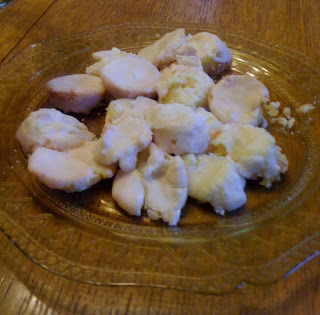 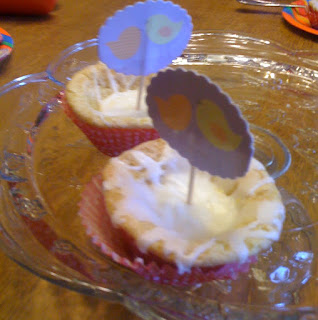 I saw a blog today where a woman threw a party using Little Debbie snack cakes stuck on sticks to look fancy. Maybe I should do that next time.
Posted by Brandi at 8:52 PM 2 comments: 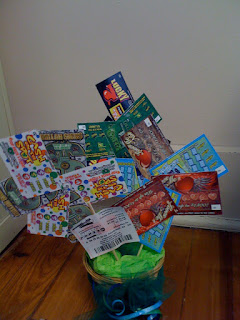 I made this bouquet for a friend recently. She loves the gambling. Even though I rarely buy a ticket, we have a running joke among a group of us that whoever wins the lottery has to take the rest of us on a glamorous vacation. Anyway, dear C has been ill and couldn't make her runs to the casino to get her fix. So, I thought I'd take a little of the fun to her.

Close up, I swear it looked more like three flowers. Each petal was a ticket.

It seems like a good idea for St. Patrick's Day next year.
Posted by Brandi at 7:54 PM No comments:

Some people are born story tellers. Many a cave man probably enthralled others with tales of a hunt 'round a crackling campfire in a dark cave, but only a few carefully drew those stories in colorful hieroglyphics.

Earlier this week, a man came into the office and I knew exactly who he was by the way he told a story. The plot wasn't one to inspire a 3-D blockbuster movie or a video game, but his words made me settle into my chair and listen because he made me feel like I was witnessing it happen for the first time.

As I listened I thought about what made him such a good storyteller. Then it clicked.

This country boy made me feel the sun on his face and the sweat trickling down his back. I smelled the hay in the fields. I heard the clatter then silence after the tractor broke. I saw his new bride's blue eyes snap at him right before she turned around and marched back to the house. I could almost taste the fried chicken, mashed potatoes and green beans as I watched her throw them out the back door when he arrived two hours late for dinner. I felt the hunger in his stomach as the dogs raced toward his dinner and gobbled it.

He told a simple story using his senses. Try it.

Journal: Write about something that's happened to you. Be sure to include taste, touch, smell, sight, and sound.
Posted by Brandi at 8:27 PM No comments: 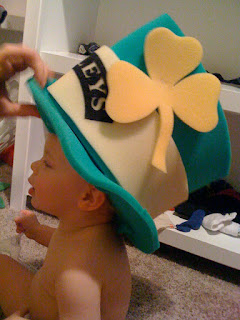 I hope your day is filled with lucky charms!
Posted by Brandi at 8:24 PM No comments:

Setting and mood have a lot to do with a scene. Consider a birthday party, for example.

Journal: Write two scenes using the same premise, but experiment with setting and mood. Use my example if you like.
Posted by Brandi at 7:14 PM No comments:

Think of your favorite stories--books, movies, stage productions, etc. Where do they take place (continent, culture, socioeconomic, rural,etc.)? What time period are they? Is there historical significance? What time of day? If you were designing a set to create a movie, what elements are absolutely necessary?

Journal: Compile a list of your favorite stories and consider the settings. What do they have in common? Try writing a scene with one or more of those common threads.
Posted by Brandi at 6:06 AM No comments: