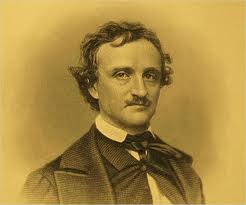 Edgar Allan Poe is considered the father of the American short story. The man knew how to tell a creepy tale.

I've taught short stories--both studying them and writing them. The most effective way to learn about short stories is considering Poe's rules.

Here are a few that will help you create a better short story.
***Most importantly, each word or phrase is present to create a single effect/mood/emotion in the reader.

Go ahead and enter it in a contest. OWFI is accepting entries until February 1.
Posted by Brandi at 6:38 AM No comments:

Nothing is a sure thing.

If I carefully schedule everything at home and the office--we're talking 10 schedules--so that I can have one measly hour to write or go to yoga, fate (that brat) will intervene to remind me who is boss.

If I stay up late on Pinterest to find activities to dazzle my three-year-old son, he will be unimpressed. He will stare at me in disappointment when I present the color/number wheel game I made with matching clothespins. Pipe cleaners and finger paint will fail miserably, too.  His thrill of the day will be when we pour baking soda and vinegar down a drain to unclog it.

The only sure thing...is that nothing is a sure thing

So, imagine my surprise when I discovered something that made everyone in my house smile. Strawberry cookies! My son loves how pretty and pink they are.  I love how easy and tasty they are.  Even my health nut husband ventured a nibble and said, "Those are some good cookies."

The best surprise of all was when I felt little arms surround me and heard, "Mommy, I love you."


Are you ready for the recipe? 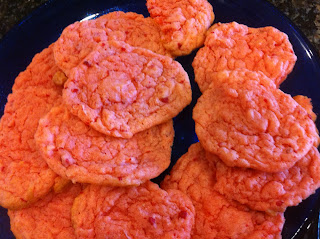 Mix 1/2 cup vegetable oil with 2 eggs.
Add strawberry cake mix and 1/2 cup coconut.
Drop onto cookie sheet. Bake at 350 for 8 minutes.
A strawberry cookie may not be a sure thing, but it sure is a sweet one.
Posted by Brandi at 2:36 PM 4 comments:

Thomas the Train and Rudolph the Rednosed Reindeer 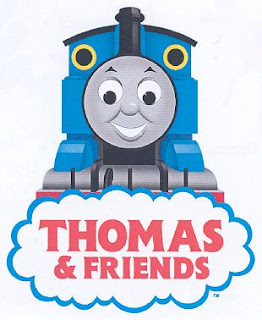 Well, "bust my buffers." I can't believe my little ol' blog causes such a ruckus.    An entry in August has quickly become my most read.

I suspect some people got upset when I suggested that Thomas the Train mixed sexism with its message of being nice, working hard, and being honest.  I also mentioned that, according to Google, lots of others agreed.

Boy, mention sexism and some people have a one track mind. You'd think I'd suggested it promotes communism.

Causing "confusion and delay" is not my intent. And not to take anyone off track, but may I suggest that when one considers the time period in which the story originated the original show isn't sexist, but merely old-fashioned? Although some people say communist. 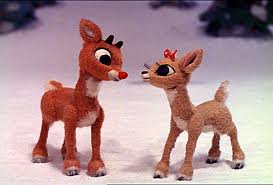 This thought occurred to me as I watched the 1964 classic Rudolph the Rednosed Reindeer with my family. (Let's just get this out of the way: we all know you should watch tv with your kid and teach him or her your values, not expecting entertainment to do it for you. That's kind of the point of this blog entry.) When Rudolph ran away, Donner tells Mrs. Donner to stay home because looking for Rudolph was "man's work."  Those silly female reindeer didn't stay home, though. Mrs. Donner and Rudolph's girlfriend go out to look for him anyway.  Later, the narrator says, “They were all very sad about their friend, but they knew the best thing was to get the women back to Christmas Town." (What would their plans have been otherwise--hang around and play reindeer games?)

Is Rudolph the Rednosed Reindeer sexist? What about Thomas?

Well, our world changes.  In defense of Rudolph, only one of these stories has the opportunity, as it moves from station to station and series to series, to change.

Thomas the Tank Engine first appeared in a book in 1946. The first appearance in a tv series was 1984. Thomas chugged onto American tv in 1989. It has had several overhauls.

What does that tell me?

Someone else thought the show was a little sexist, or old-fashioned, too.
Posted by Brandi at 9:28 PM No comments:

My Space was all the craze.  I easily passed on that trend. I finally relented to Facebook a few years ago and am somewhat active. I can't get the knack of Twitter. Linked in? No, thank you.

Ugh! Do I have to do another social media?  I don't have time for this.

People talked about it differently than the others.  They didn't say, "Oh, you have to try it!" Instead, they were too busy trying everything on it.

At Christmas, my cousins finally convinced me to venture forth into the world of Pinterest.

My life will never be the same. Thank you, Pinterest.
Posted by Brandi at 10:31 AM No comments: Happy New Year!
I've done my part in starting it off right.
Reviewed last year's list of goals to celebrate those obtained and evaluate those that weren't.
Revised goals for 2012.
Eaten black eyed peas for luck.
So, 2012, bring it. I'm ready.
Posted by Brandi at 1:47 PM No comments: