Garrett says it's my fault.

I'd asked Baby Girl to remove her feet from my ribs, and she did.

Hmmm. Is she obedient or a smartypants? 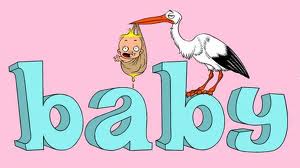 After a nearly textbook pregnancy, Baby Girl decided to switch things up.

Two weeks ago, she was in position. We figured she and Max would share a birthday. His birthday came and went. Labor Day came and went.  On Tuesday I went to my regularly scheduled appointment and she sent me to get an ultrasound. Of course, the in-house clinic was booked because it was the day after a long weekend, so we got to go to the hospital and pay extra...

...and discover she had moved into a left transverse position. In other words, she is lying sideways with her head on my left.


At thirty-nine weeks, this position is less than ideal.


Garrett has been so funny (in a creepy way) about it.  He said I should thank my "lucky stars for modern medicine" because a hundred years ago both the baby and I would die. Thanks, honey. The whole dying-in-labor-thing doesn't appeal to me. Later, he explained the origin of the Caesarean and how it was practiced on dead women for centuries.  Then live women--who weren't expected to live. It wasn't until the 1500s that a woman survived. Woohoo! Today he went on to talk about the extensive family research he's done recently: Generations of men in my family had more than one wife who died in childbirth.  Nice.

I guess we're a good pair because as morbid as the conversations have been, I feel strangely comforted. I mean, he's done a lot of research to be aware of what's going on with me. That's sweet, right?

Still, I'm not excited about the possibility of a c-section. Sure, women do them all the time.  But I don't.  My chiropractor friend Breanna did acupuncture on me this morning.  Baby is already moving more than she has since she spun around into this crazy position. Maybe she'll dance around to where she should be before I have to have a c-section.