My mind is filled with random facts about Elizabethan England and Shakespeare. One time I was accused of cheating at Trivial Pursuit when I correctly answered a string of questions related to those topics...and won!

I need to expand my historical horizons.

So, I decided to be more observant about the Victorian Era. 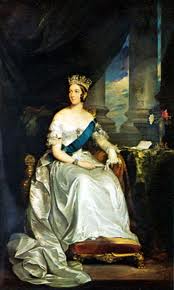 After all, like Elizabeth, an ERA was named after Queen Victoria. And what a time it was! The literature was fabulous: Dickens, Bronte, Thoreau, Emerson, Hawthorne, Twain, Whitman, etc.  Scientific discoveries rattled society.  I mean, DARWIN changed the world forever, right? 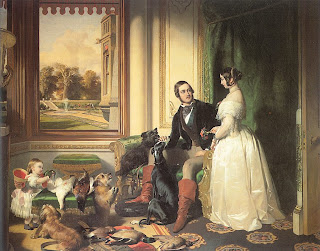 Although the time period is legendary, my knowledge of the woman it was all named after was sketchy: She loved her hubby, wore black after he died, and had a lot of kids who populated European castles. Plus, I thought her propriety influenced the time period. It seems I recall reading that even the legs of furniture were draped in fabric  because the curvature of a table might suggest that of a woman's leg. Scandalous!

Clearly, I know very little about her, so, I was delighted to see The Young Victoria on tv recently. The film was quite the love story.

Emily Blunt charmed as the princess turned queen. She played her in such a way that I really must learn more about the monarch.  The actress formally executed queenly demeanor--and then when no one was looking, she'd skip or swing her feet like a girl.  So cute!

Perhaps the story was truly about Prince Albert, though.  Rupert Friend played the young German turned husband-of-the-queen.  Charming, self-conscious, and caring for the welfare of the common man, he made me wonder what would have happened if they'd never met and fallen in love.

Check out the movie. What do you think?

I love historical fiction. Can anyone recommend a novel relating to Queen Victoria and/or Prince Albert?