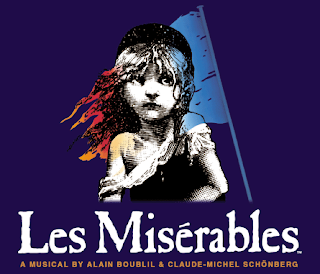 I saw Les Mis yesterday with my friend Alison and her friend Nicole.

Since I've not read the book, I only knew what I'd read about the book and musical.
Here's the extent of my knowledge:
As I watched it, I realized my expectations were correct. The music was beautiful and required talented voices. The backdrops effectively enhanced the power of the story as well as the setting.

But I was a little confused about the timeline when the characters began enacting a revolution.

See, I'm really not very good at history. The trick I've always used to connect to a time period isn't the politics or inventions--it's the fashion. So, when it seemed the musical was talking about revolution, I was seriously confused. Didn't the French Revolution occur not long after our very own? The guys onstage wore long pants, but our American rebels wore breeches that stopped at the knee. Was it a French thing to indicate class? And didn't the French of the French Revolution wear fabulous, fancy clothes with elaborate wigs? Marie Antoinette lost her head during the revolution, and she was a fashion diva, right?

So.... I was confused that this started in the 1800s and the clothes didn't look right for the French Revolution. The musical supposedly began in 1815. My mind remembered that the turn of the 18th century was the time of Jane Austen. Where were the empire waists? Hmmm. Maybe society was over those by the time 1815 rolled around.

So, I came home and looked up Les Mis online. It's not about the French Revolution. My search taught me a lot about the time period. No wonder it was a rather depressing novel. Well, go ahead, read for yourself here and here.

I'm so thankful I live when and where I do.
Posted by Brandi at 9:08 AM

Email ThisBlogThis!Share to TwitterShare to FacebookShare to Pinterest
Labels: broadway