My hubby is a suburbanite.  He's lived in suburbs all over the country, so moving to a small town required a shift in point of view from a cultural perspective.  What is normal in Suburbia does not always apply here--and vice versa. When I first moved to Suburbia, I marveled at the stylish teens. If it was in the mall one day, it was on their bodies the next. Members of a small town take shopping trips to a larger city, shop the local stores, or go to WalMart. If a little thing like clothes stymied me, I can't imagine the battle going on inside the brain of my the-world-is-black-and-white-husband.

Lately, he's experienced a few important milestones in his rite of passage to being a true citizen of Ruralville.

The other day he entered the post office and the cacophony that met his ears made him suspect a terrorist attack. Then a woman walked past him with a big grin on her face. She didn't have a gun in her hand, and the noise continued so he figured he was safe. He rounded the corner to see a long line of people... and chickens. Did you know you can mail chickens?

Small towns love parades.  Each December, at least a thousand people line the street at night in 20 degree temperatures for a couple of hours to look at floats and cars lit up like Christmas trees.  Our family business has been around since WWII, but we've never been in the parade. I made it my mission to make that happen this year. The theme was The Songs of Christmas.  Garrett immediately popped off with "Grandma Got Run Over by a Reindeer." 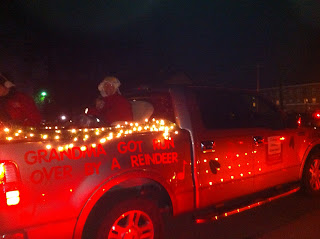 My ninety-year-old grandma was in.  However, the chilling temperatures (and good sense) confined her to the warm cab while Garrett dressed up like Grandma instead.


He and Max waved at people from a wicker sofa in the truck bed while the rest of our office handed out candy from stockings.

Some people think that dressing in drag during a parade is a big city event, but clearly we do it in small towns, too.

After the parade Garrett experienced another first. The kids were secured in their car seats. The other seats were occupied by my mother and grandmother. Garrett and I bundled up in the comforter and cuddled on the wicker sofa as my father whisked us through town to our car. At one point, we wondered if he remembered we were back there. Without seatbelts.  Without anything securing the furniture to the truck.  To calm my nerves,  I tried to pretend we were in a horse drawn carriage. (I have a scar on my head from riding in a truck bed at age four and getting friendly with the pavement.) Garrett had a great time, though. You're just not small town until you've ridden in the back of a truck.

He can check those off his bucket list.
Posted by Brandi at 7:22 AM