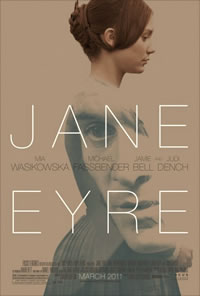 It's so wonderfully gothic!


Although other versions of the movie have been enjoyable, I much prefer this cast. 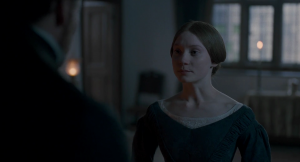 In the movie she truly is a plain Jane; although, after surfing the net, I found much more glam pics of her where she's quite pretty.

Is this what Rochester sees beyond her obvious spunk and intelligence?

Aside from Mrs. Fairfax, played by Judi Densch, the movie omits the few female figures who are kind to Jane.  In fact, other than including the friendship of Helen--which ends in her death--the movie only shows the cold, dismal parts of Jane's earlier life. Still, it's a movie, so one positive mother figure can suit for time's sake. And who better to serve in that capacity than Judi Densch?
Michael Fassbender is an enchanting Rochester. At times, he's a bit more handsome than I imagined him to be--and younger. (Perhaps because I'm closer to his age than the young Jane?)

When I first read Jane Eyre, I was astonished any girl could fall for such a cranky old cad.  I figured even if I'd not been exposed to men, I'd have better sense.  In some versions, he fits right along with my teenage interpretations.  However, if I were Jane, I'd have fallen for this Rochester, too. 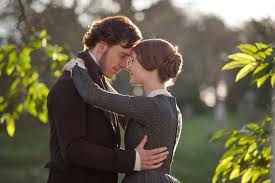 Although he can be fearsome and mean--and, sure, he lied about his crazy wife in the attic--he is, at times, delightfully sympathetic. In the movie, he is also totally and completely smitten with her. Unlike the book, he doesn't pretend to be engaged to the beautiful and shallow Miss Ingram. Although, it does seem pretty obvious he brings her to Thornfield to inspire jealousy in Jane. Even this juvenile attempt makes him more endearing in the movie. (What's wrong with me?)

Like the novel, by the end of the movie, Rochester is repentant and her social equal, so she doesn't give up anything to be with him. In fact, she proves herself to be his moral superior.

And they live happily ever after. 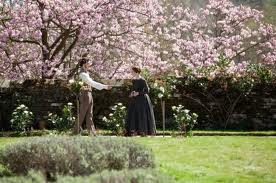