The movie. The fashion.

The girls are back in town!

I saw Sex and the City in New York City yesterday with a girlfriend. The movie was not a disappointment. On the contrary, I think I may even like it better than the tv show.

Yeah, I know, sacrilege.
Don't worry, I won't spoil it for you if you've not seen it yet. Plus, I realize that some of you aren't old enough to see it for a few years. However, fashion surpasses age and movie ratings, so I'll share something with you.

Just like the tv show, one thing stayed the same: eye candy for fashionistas. I'm not saying I like them all, but here is what I noticed...
Belts. Waist-cinchers were everywhere. Below is a pic with Miranda and Samantha in their nod to the 80's. 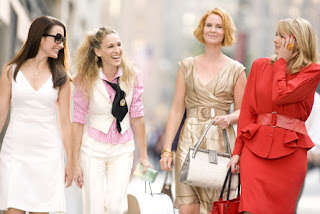 Hmmm, SJP's little man suit is looking awfully 80's, too, actually. She's pretty cute, though, right? Charlotte, as ever, looked classy and divine throughout the film. I won't show more pictures of her because doing so may act as a spoiler if you've not seen the movie yet.

Feathers. They were in Carrie's hair. They were on runway models. They were even on a bag Charlotte carried. Expect to see them. Don't be shocked if they're blue.

Studs. Sure, a girl can always accessorize with a handsome fellow, but I'm talking about the kind worn in a gang fight in an old Michael Jackson music video. Carrie wore this belt in a couple of scenes. Also, Samantha wore a dress with studs around her neck and along the shoulder. It was like she'd gone crazy with the Bedazzler. 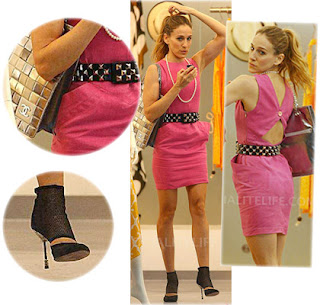 Pearls. Make it a long strand as seen above. Carrie wore these often. The other ladies wore long beads, too. However, Carrie even slept in hers. I doubt that's comfortable.
Roses. These flowers were everywhere. They were in several scenes in expected places like tables--tightly clumped arrangements in gorgeous and unexpected colors. However, they also appeared as a floral pattern in clothes as seen below. (Is it just me or is the line of that red dress part of what was wrong with 80's fashion?)I couldn't find a picture, but I loved the white jacket Carrie wore that consisted of white fabric roses. 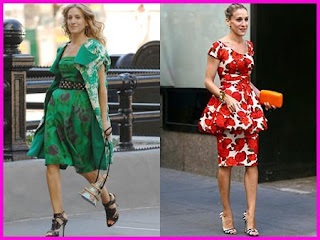 Shoes. Certainly, the girls know how to rock a pair of shoes. In the movie, you'll notice they begin doing it in strange combinations. Chunky gladiators are worn with really girly dresses.

Metal. Whether it's an entire ensemble or only the accessories, these girls bring on the Midas touch. I'd also like to note here that I loved the Cinderella motif throughout the movie. Miranda seems to epitomize the idea of transformation through her style. She's never looked better. Again, see below for an example. 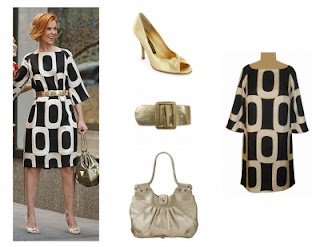 Let me know what you thought of the movie and what trends you predict!
Posted by Brandi at 2:42 PM

Email ThisBlogThis!Share to TwitterShare to FacebookShare to Pinterest
Labels: movie