Journal: My brother is married!

I've been away from technology for the last week. My husband and I spent time at Lake Tenkiller where we have neither cell phone nor internet access. We definitely got away from it all--except for the tv interview on Thursday and my brother's wedding this weekend. It's been a memorable and busy trip. 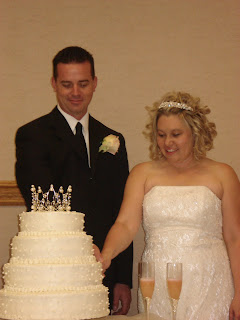 My brother married his sweetheart this week. They've dated for seven years. After the preacher announced them "husband and wife," my uncle cried, "Hooray! Hooray!" It was an event many of us have anticipated for a while. We had the rehearsal dinner Friday night and the ceremony on Saturday. It was fun to see family and meet my brother's co-workers, friends, and new in-laws. I was so grateful that they planned the wedding during a time I could attend. It was a special time.

Unfortunately, I cried during the ceremony, which alarmed the bride and her mother due to their belief that the tears cried during the wedding are tears the bride will shed during the marriage. Since I'm not much of a crybaby--I was in college before a movie, tv, show, or song ever made me tear up!--we decided my tears didn't count since they were probably due to pregnancy hormones. Still, it was touching to see my brother taking his vows, winking at his bride, and being the happiest I've ever seen him in my life.

Journal: Write about a ceremony. It can be a wedding, christening, graduation, etc. However, it could also be something more original. Write it either as a narrative or a scene.
Posted by Brandi at 12:47 PM