Usually his answer is trashman. A year ago, it was construction worker.

But life is fast-paced and ever-changing with the preschool set.  Just a few months ago, my uncle excitedly gave Max a Transformer saying he wished he'd received such a cool gift as a kid.

He peeked inside, dropped the bag and said, "No, thank you." Max was so terrified, he wouldn't stay in the same room.

Uncle Ed claimed he gave it to another little boy, but I suspect that robot is carefully tucked away so he can play with it when Aunt Mary Sue isn't watching.

No matter the history, Maximus Prime is geared up about robots now.

Any guesses on his Halloween costume?

For now, check out this cool book for your robot man. 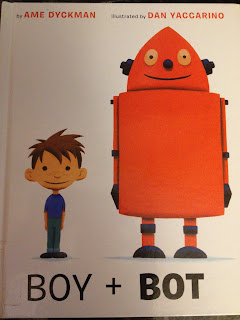 Will your little robot love Boy and Bot?