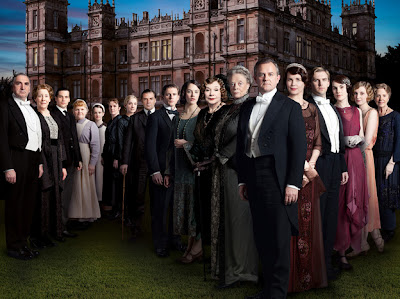 I dreamed--seriously, I had a dream--about eating petit fours and drinking tea while watching the premier.

Instead, I drank a glass of water and ate a granola bar.

So, please, let's have tea now and share all the gossip of Downton.

My husband is annoyed.

Lady Mary and Matthew. My husband thinks it's too obvious that Matthew is always the savior of Downton and that Lavinia's father's inheritance goes to Matthew.  I think there has to be a fourth person on the list.  If Lavinia's 's father was as sweet as his daughter, I can see him leaving it to...Mary!  *Gasp!* Why? Well, it's a soap opera. Plus, he'd think his daughter has all of the money from Downton and they cared for her so well even though the family was losing the estate, so...leave a little to Mary in thanks.  I agree with my husband that they can't leave the estate.  After all, the show is called Downton Abbey, not Downton Abbey-less.

Lady Edith and Sir Anthony. Why is Lord Grantham and the Dowager so suddenly concerned with Sir Anthony? Wasn't he going to propose in another season?  I'd think now more than ever they'd be thrilled Lady Edith might be married off.

Lady Sybil and Tom Branson. How will they fit into this season?  How will his politics be incorporated? So exciting! I adore her.

Martha Levinson. What did you think of the introduction of Lady Cora's mother? The Dowager Countess and I share the same opinion of her.  Then again, that shouldn't be a surprise. I took a test, and if I were on Downton, I'd be her. I know you're jealous.

Mrs. Hughes. Oh my. I kind of thought the housekeeper might have a thing for the butler Mr. Carson. They at least held mutual admiration and respect.  Suddenly, in this show... where did all this animosity come from? I've never seen their relationship so stressed. True, she's ill. I'm curious to watch the whole thing play out.

Daisy. She seems to be coming more into her own. Why she continues to let Thomas influence her is beyond me, though.  What really has me curious is her interest in the new footman. Why does she care about his dalliance with the American maid? Is she simply concerned? Jealous? Or is she recognizing what she might have missed with sweet William?

Thomas, Thomas, Thomas. Your evil ways are a delight to watch since I'm safe outside of Downton Abbey and can not be a victim. He is one ambitious fellow.

O'Brian. I like the continued changes of her character.  She is still spiteful and manipulative...but taking sides with the right people. It's about time.

Mr. Bates. Free Bates! Get him out of the prison. I'm not a fan of what's going on with that story line. And on that note, who killed Vera? My theory is Sir Richard Carlisle --Lady Mary's ex-fiance--had her killed because she was shopping the story. Yep. That's why the family stayed out of the papers. To protect him. Not Lady Mary. Wouldn't that make a good story?!

So, what do you think?

Remember that test I mentioned to let you know what character you'd be? Take it here and tell me who it says you'd be.

Plus,  let me know your thoughts on what's going on at Downton. But, since Season 3 has already aired in England, if you're privy to real information, please don't spoil the fun for the rest of us.