Books take us places we've never been. But they also inspire us to see those places for ourselves. 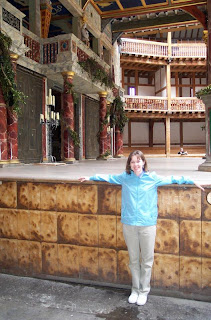 I was downright giddy when I found the spot where Shakespeare's Globe had stood.  Going inside the replica was almost as cool.

My friend Ange is in Asia now. I remember she was a big fan of Amy Tan. Plus, I know we read The Good Earth in high school. Hmm.  Definitely need to know if literature influenced her desire. She was a big fan of The Lord of the Rings, and after watching the movies, she went to New Zealand.

My friend Sonia travels to Oxford with her husband every year, and she's a huge fan of English literature and television.

My friend Stephanie had to go to Italy after watching/reading Under the Tuscan Sun.

My mother has traveled the world, but before she did, she longed to see the antebellum mansions of the South due to great books like Gone With the Wind .

Have you ever traveled anywhere because a book made you want to go?
Posted by Brandi at 8:11 AM