I meet some of the nicest people during lunch at the annual conference held by Oklahoma Writers' Federation, Inc.  One such lunch I sat across from a lively, charming woman who had one novel under her belt and really had a head for marketing.

Since then, Malena Lott has written more novels and her branding consulting firm the Athena Institute (don't you love that name?!) has created Buzz Books.  Get to know her on her blog. She loves sisterhoods as much as I do, and her cheerleader spirit shines through.

I'm thrilled Malena dropped by our virtual party.  Check out what she brought as her potluck. 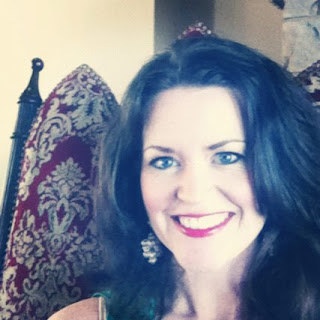 Confession: I like appetizers more than I like meals, which means appetizers are often my meal. For me, summer is one salad, dip or nacho after another. Here's one of my favorites. 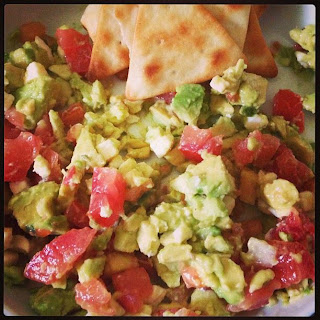 Avocado Feta Tomato Salad
Yep, just those three ingredients, but toss in some lemon or lime juice and salt and pepper to taste. Add some lettuce if you'd prefer it in "salad" form or just use the AFT for the dip. You can use tortilla chips (lime chips are pretty awesome with it) or pita chips. Very filling and pretty GOOD FOR YOU!

Malena's fifth novel, FAMILY CHARMS, about three sisters who travel the world to see where their mother has been the last twenty years and what kept her away, is available in trade paperback and ebook. Connect at malenalott.com. 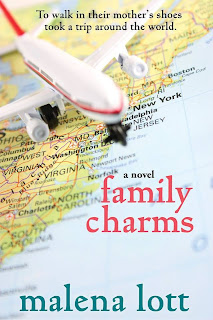 Posted by Brandi at 7:04 AM 2 comments: Links to this post

Males are a novelty at writing conferences. So, what I noticed first about Tom Barczak when I met him was how calmly he handled a bunch of women asking questions, sniffing out if he were single. He was a perfect gentleman and a nice guy.

Later, I learned Tom is a Renaissance Man who holds down a day job. He is devoted to his three boys. He cooks from his garden. He's the author of Veil of the Dragon, Awakening Evarun, and Fall of the Chosen.
Read his blog and you'll know even more why I wanted you to meet him.
Because, above all, Tom Barczak is genuine.
Even if he does write fantasy.
Blog readers, meet Tom. He brought salad. Let's party!

***
So, I got to make dinner, a salad, tonight for my girlfriend.
My 3 boys and I keep a small garden in our backyard, so I actually got to use a few things from that, which I always like to do.
The end result was wonderful, savory but not too heavy.
I love to cook. I am an Architect, a Writer and a Painter, so I like to have fun with different textures and flavors when I do. I enjoy all of the senses.
Salads, however, are a new thing for me. But I actually felt like I had a meal with this one.
And also important: I know it’s something that my kids will eat.
Oh, and though I had my doubts when I first imagined it, the Feta cheese was absolutely killer in this. 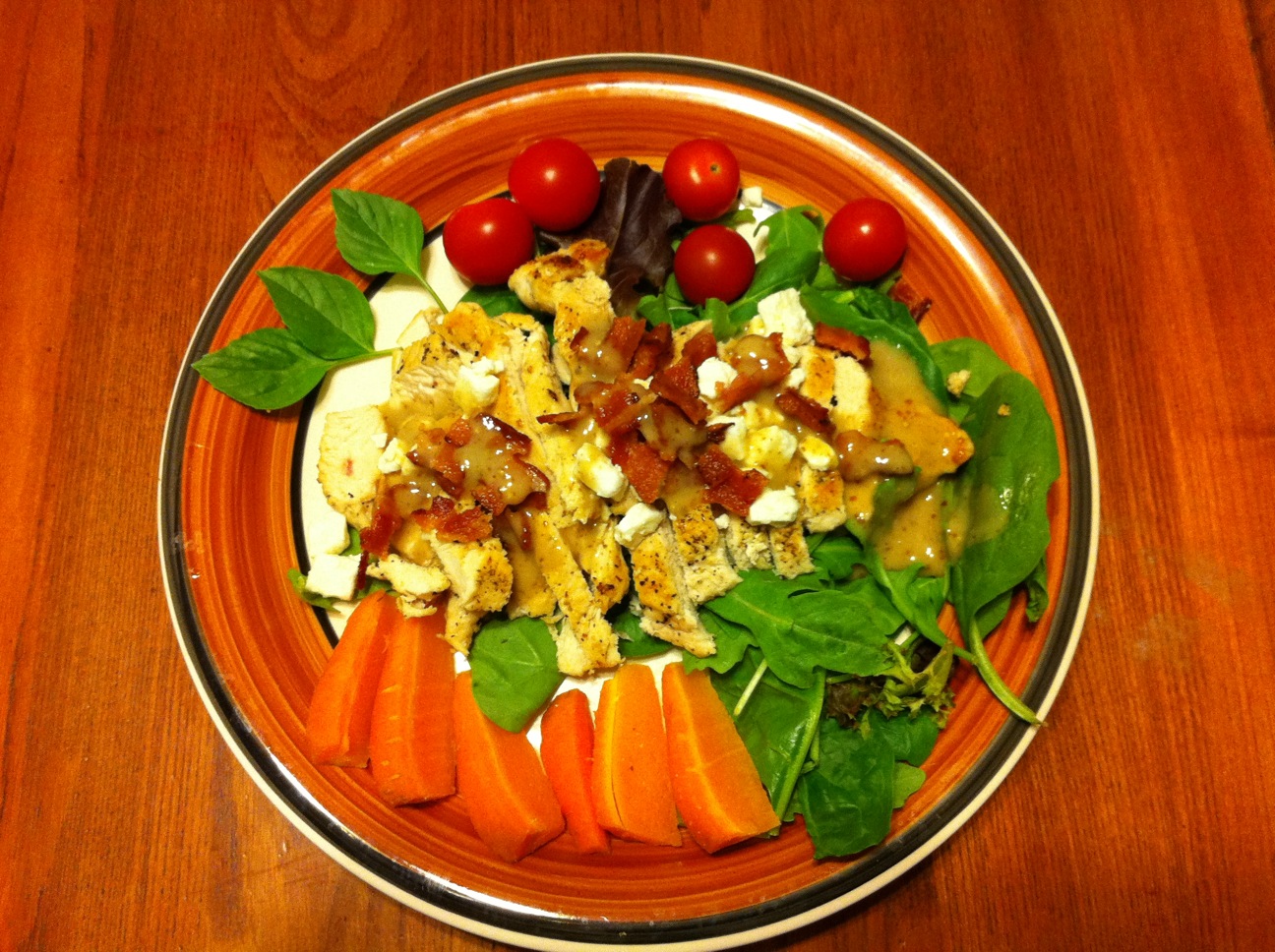 Summer Chicken Salad
Spinach and salad greens.
Grilled chicken breast (Sliced flatways). Then sliced and laid over the salad.
Crumbled feta cheese.
Crumbled bacon (Of course).
Light Honey Dijon Mustard Dressing.
Carrots (From my garden)
Cherry Tomatoes.
Fresh Greek Basil (From my garden) for garnish.
And as far as what drinks go good with that, well, we had Kool-aid.

My babies are embarking on big adventures.

My baby girl starts a Mother's Day Out program later this month. My son starts preschool.  They both have wonderful teachers. And I'm so thankful.

And terrified. Because I fear my beautiful, spirited, smart, self-assured girl might encounter someone in the world who might tell her she's not those things. 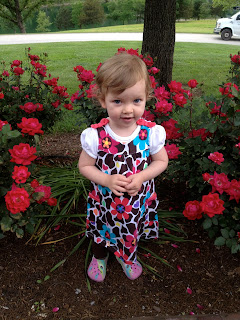 I fear my son's love for life and curiosity for how things work may be dampened with rules. 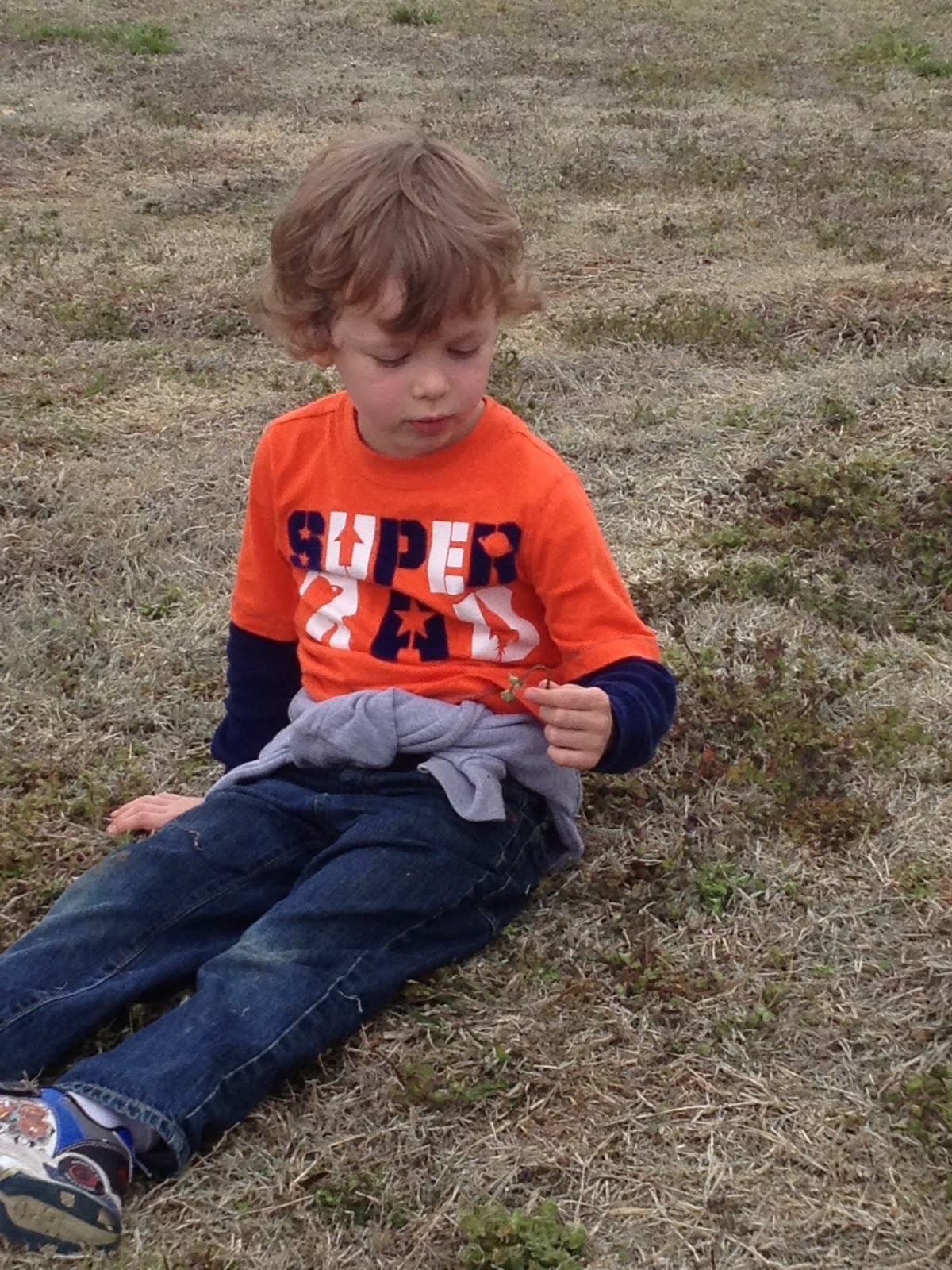 We watched Cinderella recently.  Alexandra loves anything "pletty," so the movie dazzled her. She oohed and aahed. Max squealed when the sparkles began. "It's magic! Look, it's magic!"  For days afterward, Alexandra convinced anyone nearby to try a shoe, any shoe, on her foot. Max decided we needed magic wands.

They loved the beauty of the movie. I loved that Cinderella was kind and brave and found friends in those whom many overlook.   She didn't let her stepsisters and stepmother define her. She knew who she was. And without her spunk she'd never have escaped the prison other women created for her.

Likewise, my children are strong and stubborn. I want them to know how I admire that in them. They'll need those traits as they go into the world.

Because, sometimes, strangers, acquaintances, and even those one cares about say things that hurt.

I had three specific examples of instances when people had hurt me, but I deleted them.  There's no need to put mean words back out there.  (There's enough of that in the world--and especially on social media.) These same people said nice things about me, too. But years later, I still remember the time and place of each of these instances and can't recall a specific compliment. As ridiculous as they were, these mean statements became part of how I defined myself because I assumed that's how others saw me. But the problem is that I let someone else change how I saw myself.
These statements were said as if how I was made was wrong.

And that's not right.

My children will face ogres and monsters and witches masquerading as people--and even friends.  And I hope they possess enough of the magic we call love to acknowledge that true beauty comes from within and that love of self is very powerful magic indeed.

My grandmother taught me long ago that the happily ever after doesn't lie in the hands of fate.  A person writes his or her own happy ending. One first must choose it to be so. When one experiences conflict, happiness must again be chosen.  Every person is perfect in his or her own way, and children deserve to feel that way.  Every boy deserves to feel the devotion of a princess. Every girl deserves a prince charming who will rescue and protect her--even if it's only from herself.

I know happily ever after isn't a reality for everyone. But it should be.

I hope my precious children know that.

Just this week, a collection of links to articles popped up on my friends' Facebook pages that inspired this blog.  I've posted links below.

Unhappily ever After--a group of satirical(?) pictures of fairy tale princesses after they've married their princes.

Thigh Gap--apparently, it's the hottest trend for starting school

How to Talk to Your Daughter about her body--I disagree with some of this article, but like most of it. For example, I think it's okay to tell my daughter she's beautiful.

*Added 8-10* The Day I Stopped Saying Hurry Up: I forgot to add this one and it is so important to remember, especially now that school is starting.

Posted by Brandi at 9:13 PM 8 comments: Links to this post


My friend and fellow Inkling Shel Harrington is at the party today. 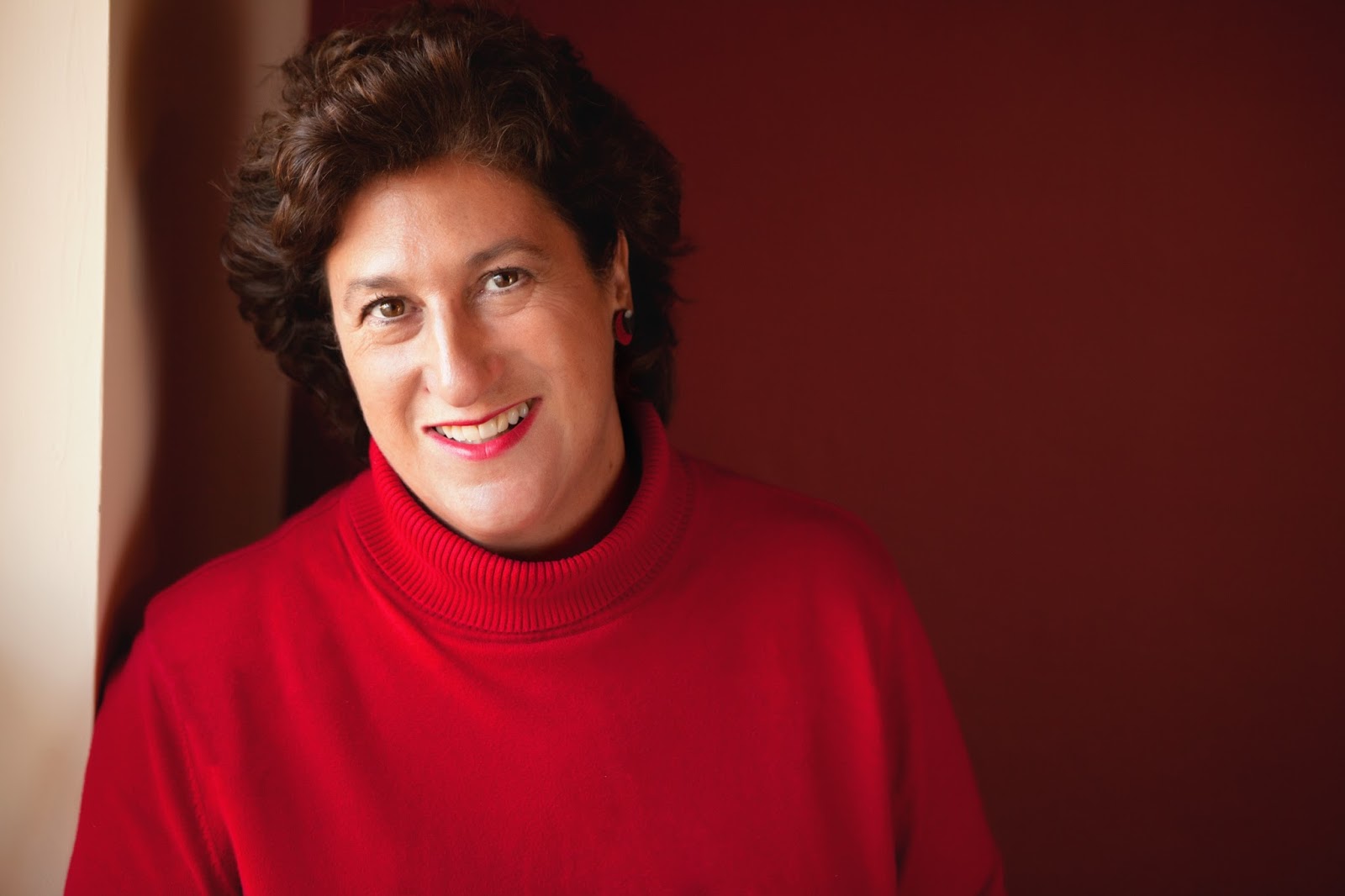 My own grandma regularly served a version of this magical goodness, and I'm pretty sure I've had the meal Shel describes in the Magical Meal portion.  This sweet concoction makes me nostalgic for family gatherings of yesteryear, which is fitting because Shel believes in traditional family values.  By day Shel is many things. One of them is a divorce lawyer--who doesn't like divorce.

If you are in any stage of a relationship, check out her blog.  She offers sage relationship advice with a dash of humor, compassion...and attitude.

But first, whip up her recipe. It won't take long!

This picnic-worthy salad is a blast from my past. With only four ingredients, it can be whipped up and ready to contribute to that potluck in minutes. This is my “you need it by when???” salad.
The ingredients are so accessible that even in a pinch I know I’ll be able to find everything at the local grocery store in my small town. Here’s the list: 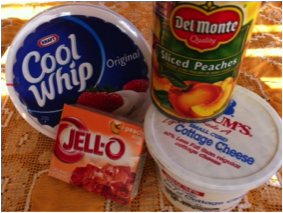 
Step 1
In an electric mixer, mix the cottage cheese, Jello, and diced peaches until the jello powder is thoroughly blended (it won’t be smooth).
Step 2
Fold in the Cool Whip.
Step 3
Scoop your lovely concoction into a serving container and garnish with a peach-slice flower. (I added a blackberry center)


Complete Magical Meal Suggestion
For a magical meal, step back in time with grandma’s fried chicken, potato salad with crunchy celery, and deviled eggs to compliment your fluff. Finish off the meal with bite-size brownies or homemade cookies for a taste of chocolate. What to drink? Sparkling cider is a festive family-friendly beverage choice reminiscent of days gone by. The over 21-crowd might may prefer a fun-flavored hard lemonade.

Special Tricks
In addition to being tasty and quick, this salad is versatile. If you are serving a small group, you can use the smaller sized Cool Whip, Jello, and cottage cheese (but stick with the larger sized peaches so that you have enough slices for your garnish). Fun alternatives include using fresh peaches when in season and experimenting with different combinations of jello flavors and complimentary fruits (how about mixed berry Jello with blueberries?).
Whether contributing to a potluck, entertaining guests, or whipping up a meal for the family, this light tasty salad fills the bill and transports you back to a simpler time.
Posted by Brandi at 7:43 AM No comments: Links to this post