First of all, let me clarify that I have no delusions of SuperMomness. Quite the opposite. While other children enjoyed fun day trips and getaways for Spring Break, our little people were stuck at home with me.

So, since Max had been wanting to camp out for over a year--see, we procrastinate around here--I planned a camp in.

My kind of camping trip.

I found some great ideas on the blog Rainbows Within Reach.

While the kids slept, Garrett and I set up the campground. We posted these signs and set up a campfire from Oriental Trading.  We pitched a Cars and Fairy tent in the formal living room. The hallway became the hiking path. We made the den into a pond. 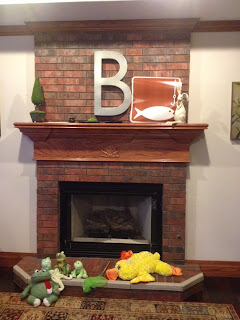 We raided the toy room and put their stuffed animals all over the house.  (I swear those things multiply when we're not looking.)
The area by the piano became the bear cave. Shhh! They're hibernating! 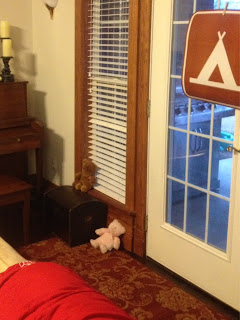 I set out National Geographic magazines and books on animals in a weak attempt to make it seem more like nature. We used the iPhone app White Noise to have water, cricket, and frog sounds. 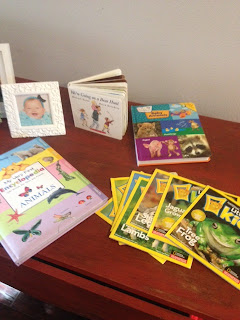 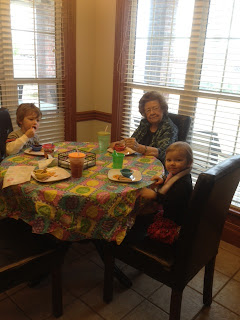 Then they built a campfire...with their own hands!
We read Going on a Bear Hunt before the kids went out into the wilderness and reported back what they saw by acting like the animals.

Max and I made Playdoh insects.  Alexandra mostly rolled it into balls and tried to show us that Playdoh balls don't bounce very well. 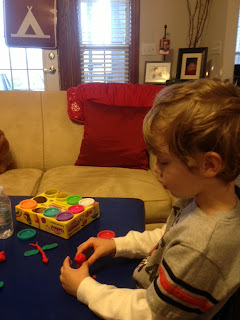 We talked about the difference between what happens at day and night. 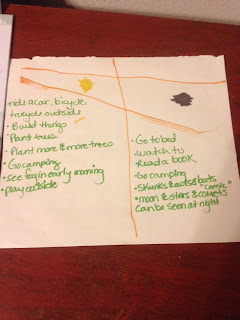 When dad got home, they grilled hotdogs. Then, the kids put on their backpacks. We gathered up their science journals that we'd made and went on a hike.  The kids pointed out all the animals they saw on our journey, and Garrett and I drew and wrote them into their journals. 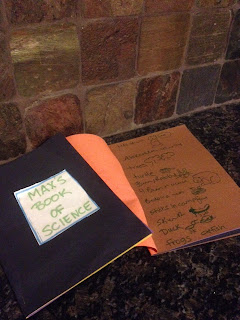 We rested at the pond and looked through our list of animals. Then we played charades.  Max told Garrett to be a bird.  We had great fun watching Garrett fly around and caw like a crow while I pretended not to know what he was.

All that hiking and playing works up an appetite, so we made smores. 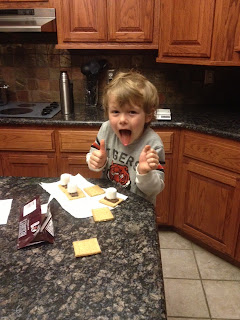 They were soooo messy but sooooo yummy!
The kids took a swim in Lake Bathtub before we hung out in Max's room for a while and looked up at the (glow-in-the-dark) stars (on his ceiling). 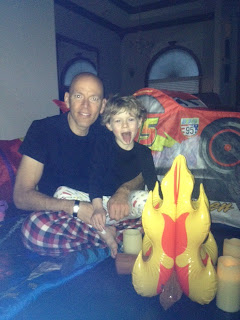