Our big family holiday is always special to me. Now that I have children, though, I wanted to pack even more into December. So, I made a list of memories and called them "Christmas surprises." Some nights it was even a surprise to me when we ended up doing one.  We had a blast! Here are a few from our list.


Get cute photos of the kids.  The Christmas card episode almost ruined this for me, but we had so many cute clothes for Alexandra that the opportunities were easy. Below is the onesie Aunt Lisa bought her that says, "My Auntie Knows Santa." I stuck her in the tutu and in a leopard chair so that years from now she can say, "Ma--aaawm! I can't believe you put me in that skirt. And your chair was ugly." But for now, she's happy. 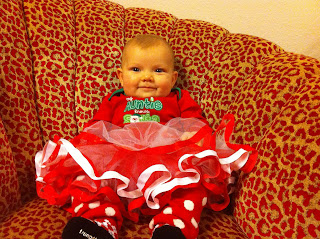 Make fudge.  Few turn down this holiday treat. Since I don't cook a lot, I usually mess up the first batch.  Not this year! Another first? I made several batches without uttering a single profanity. My sous-chef made all the difference. 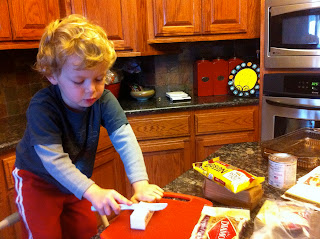 Advent Calendar. My mother made this calendar when my brother and I were small.  Hopefully, the kids will enjoy it as much as we did.  Max seemed to...when I remembered. 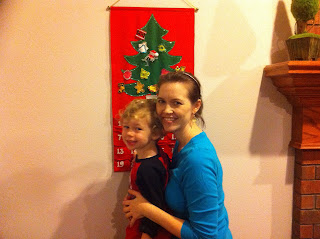 Decorate cookies with the grands. After looking at the ingredients of pre-made icing, I decided to make my own for the first time and was pleasantly surprised with the sheer ease and yumminess of it. 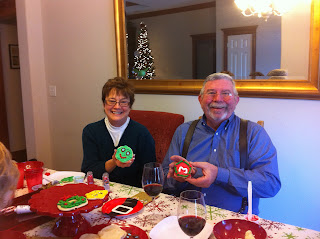 Tour local holiday lights while wearing pajamas.  Max disappointed me by refusing to wear his adorable Santa pajamas.  In return, I disappointed him when I announced his surprise was to look at lights.  After we were on our way and he realized the activity wasn't a trip to Lowe's to shop for 60 watt bulbs, his trust in me was restored.

Watch Frosty the Snowman and make our own snowflakes. After making a mess of the floor and creating some crazy looking snowflakes, I finally Googled a how-to.  The results? Beautiful!

Visit Santa. Max broke line, rushed to the bearded man in the red suit--and simply stared.  After playing with a train and getting the stink-eye from an elf when another little boy knocked the train off its track, Max summoned his courage to sit in Santa's lap and mumble his request.  Two face-down-and-belly-on-the-floor tantrums later, he wanted to see Santa again for another piece of candy.  Glad that experience only comes once a year! 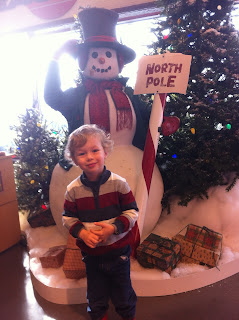 Write letter to Santa.  I kept the letter for a scrapbook...that I'll make...someday. G scanned the letter and emailed to Santa.  Those elves are high-tech now.

Make cupcakes. This one wasn't my idea, but I'm glad he momentarily centered on the giving nature of the holiday. His heart was set on it, so I took out my Sprinkles cupcake mix from William Sonoma and got to work.  They were delicious. 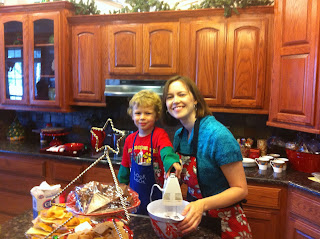 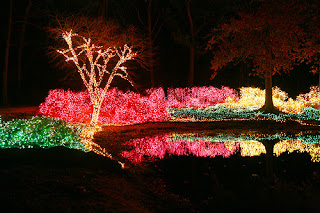 Set out cookies for Santa.  The first Christmas he fell asleep. The second year, he was sick. Last year, he wasn't too interested. But I had high hopes. This year, he thoughtfully chose the cookie his dad had decorated and placed it on a stand.  Then he considered milk, but Grandmary convinced him that Santa would go to the fridge if he needed some.  In the morning, Max noticed a bite out of the cookie and an empty milk glass.  He figured Santa ate a lot of cookies throughout the night and was pleased he tried ours. 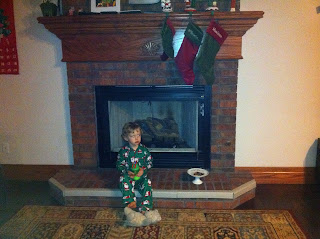 As I reflect on the fun times we had and look at the pictures, I notice two things: 1) I really need to do something about my hair. 2) We should paint the walls as soon as the kids are old enough to stop writing on them.
Hmmm. Guess I have a start to those New Year's Resolutions.
Posted by Brandi at 7:43 AM