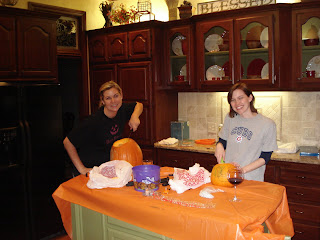 My amazingly talented friend Jennifer is like a Martha Stewart (who doesn't make you feel bad about yourself for being less domestically talented) combined with a Rachel Ray (who actually listens without interruption after asking a question). Plus, her twin boys share the same birthday with my special little guy.

So, you know, she's pretty cool.

I first glimpsed her hostessing skills when we vacationed at Lake Texhoma one weekend when she was fresh out of college. She made pretty little appetizers. At the lake.

When Jennifer and her hubby Johnny married, she wrote monthly, multi-paged newsletters to her bridesmaids. And the thing is...they weren't even annoying. They were informative, creative and entertaining. How does a bride pull that off?

She's inspired me and many others to put a little more effort into parties and get-togethers. With her, it's not just a meal, it's an event. Although I'm not blessed with the same gift, I try.

After watching her Halloween party inspiration on the Mom on the Move segment on the OKC news, I was totally inspired by the Eyeball Salad.

Hey, I thought, I could probably maybe possibly do that. 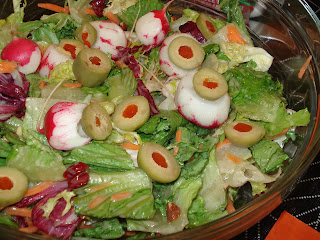 In fact, I planned an entire Monster Meal. 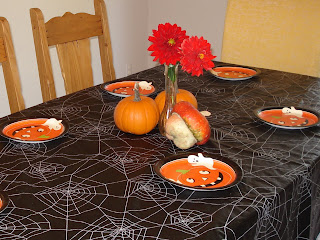 My grandmother and brother and sister-in-law came over to enjoy it. 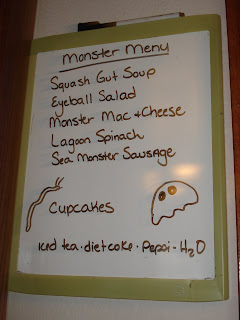 When we plated the food, my brother stared at it and said, "I'm a little scared to eat this." 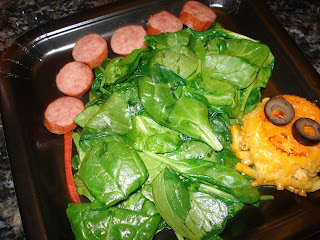 My grandmother assured me it was fun. Go me!


I think I'll do it again next year, but I'll change a few things:

1. The soup was from William Sonoma--and was delicious--but I'm not sure if I'll do it with the meal again.
2. The mac and cheese on spinach idea was from Disney's Family Fun magazine. They placed the monster on top of the spinach. Next time, I'll do that, too. In fact, I may join the sausage with the noodles to look like one long swamp monster.
Posted by Brandi at 7:32 PM