Last Saturday we had a family reunion with my dad's first cousins' families. Some of them hadn't seen each other in 47 years. It was fun to meet so many "new" cousins.

Baby Max had a blast. He ran laps around the house from 9:30 AM to 4:30 PM. I swear we don't give the kid caffeine, but he had more energy than anyone there. With all of the people and Molly Dog to play with, he had plenty of distractions, too. He met a 2 third cousins and a third cousin once removed who were all about his age. He's never had such unlimited time with so many playmates.

The picture shows my brother hanging out with two of the little guys. 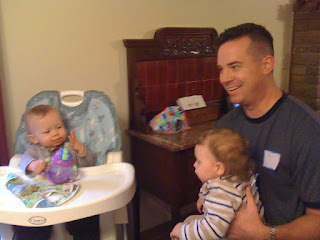 Meeting new relatives wasn't the only first I had that day.

One of the boys grabbed for Max's bottle. Due to all the illnesses going around right now, I took it from him quickly and said, "I'm sorry. That's not yours. Let's go look for your bottle."

Little Luke didn't crumple into tears, screams, or hysterics. He calmly released the bottle. His eyes never wavered from mine as his knees bent and he sat down. Without pausing, he extended his body until he was lying supine on the porch--still staring at me.

Email ThisBlogThis!Share to TwitterShare to FacebookShare to Pinterest
Labels: family