When we took this photo, we had no idea how much we truly were living on the edge. 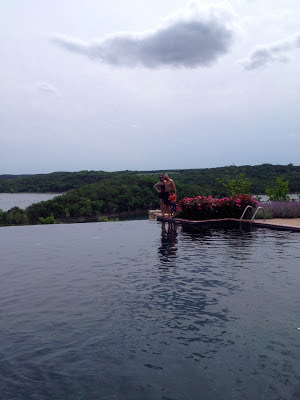 We were on vacation.  When nothing bad can happen. Right? 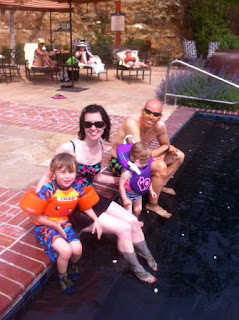 We were so naive.

When we decided to leave the pool, we removed the kids' life jackets. As he has so often done, Max declared that he didn't need swimming lessons or a life jacket because he already knew how to swim.

Then he jumped in.

We've all heard the saying "sink or swim." I figured he'd get a little scared and then realize that some skills need to be learned. Maybe, I thought, this would be a good lesson.

We all watched him. He was only a couple of feet from me. He seemed fine. Maybe Max had been right all along and he truly could swim.  He has a build similar to Olympian Michael Phelps --long body, big feet, broad shoulders.  Maybe he would show us all. Good for him.

His eyes were wide and he had a dazed smile on his face--like maybe he was surprised.  He moved his arms and legs like he was trying to move toward the stairs and climb them. He opened his mouth as if to speak and then closed it.

That's when Garrett jumped in and pulled him into his arms.

Not long after we returned a friend posted this article on Facebook, and I lost it.  Full blown tears. If I'd been unnerved at the pool, I was terrified when I read the article. We are so, so lucky.

Read this article.  Drowning doesn't look like it does on television.  Know the signs.

Max splashed through his first official swim lesson today.  He wasn't scared, and he didn't have false bravado either. When the instructor asked for a volunteer, I heard his little voice ring out. "I can try." 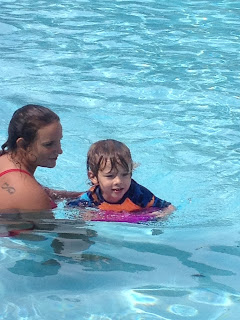