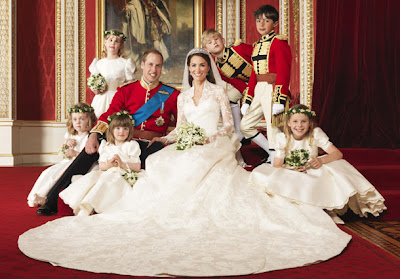 Friday began early with the royal wedding. I'm trying to figure out when I'm going to bake scones, brew tea and watch all the recorded footage. As you know from Wednesday's post, I eagerly anticipated this wedding and, like the 2 billion watching around the globe, was happy to share in the couple's joyful day.

And who can deny it was anything but joyful? They looked so happy--as a couple should on their wedding day.

If I were planning a wedding ceremony--especially to a military man, I'd imitate the clothes.  The only man more handsome than one in a tux is one in uniform. The bridesmaids wearing white to match the bride was lovely. Some say that the bride should be the only one wearing white. Pshaw!

The Brits know how to rock a hat! I'm totally getting one. Who's with me? 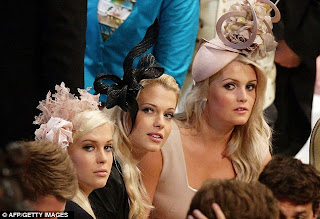 Since I've studied so many royal weddings recently, as soon as I saw the bride, I said, "She looks like Grace Kelley!" Many commentators mentioned it throughout the day. Upon closer inspection, however, I notice the gowns aren't entirely similar.
Perhaps the designer had something in mind. I read somewhere that Grace Kelley's dress style was chosen to make her appear more regal since she was merely an American actress.  Do you suppose the same intent of raising her status from commoner to royal went into the selection for Kate Middleton? If so, the move was unnecessary.

Her poise did that. 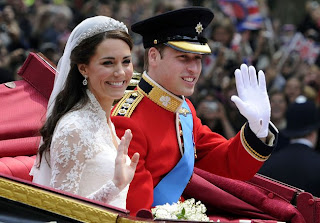 If you haven't had your fill of the royal wedding, check out this site for the royal photos.

I watched this the wedded bliss from a condo in Branson, MO. My parents, grandmother, hubby and son spent a long holiday weekend in the Ozarks. Our entire purpose for going was to give our son the opportunity to ride a real steam engine. Although he knew it wasn't really Thomas the Train, he loved it; although, I suspect he might have liked the popcorn more. And he learned a new word: caboose!