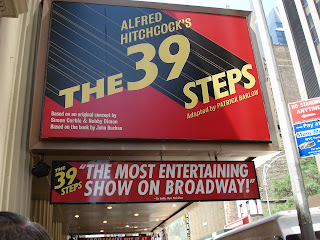 I took my mother to see The 39 Steps for her birthday last week. I knew it would be good, but I hadn't expected it to be so funny. Four actors played all the roles. In one scene, two men portrayed five different characters by swapping hats with each new persona--one of the guys held a hat in each hand and one on his head! Not only did the show use slapstick humor and physical comedy to get laughs, but it also called on clever allusions to Alfred Hitchcock's movies. It was thoroughly entertaining.

If you're coming to NYC with someone who is less than a theater buff and more of a Family Guy or Simpson's fan, consider this show. Even if the Alfred Hitchcock's references are missed, the other laughs will make up for it.
Posted by Brandi at 2:09 PM